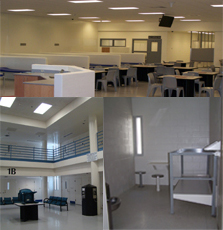 The main housing division is comprised of four (4) teams. These four teams are assigned to 12.25 hour rotating shifts that alternate on a twenty-eight day cycle between days and nights. The Housing Officers direct the day to day operations in the Housing Units. They are responsible for the custody and care of the inmates in their assigned units. This includes maintaining proper security; conducting rounds and periodic counts of inmates; maintaining proper order and decorum among inmates; searching inmates; ensuring that the living quarters of inmates and the areas for which they are responsible are kept in a sanitary condition; issuing supplies to inmates; supervising the meal service; checking incoming and outgoing mail; supervising work details of inmates in their units; documenting events, infractions of rules and any unusual occurrence; acting as a resource for inmate inquiries; and performing other duties as may be assigned.